I don’t know about you but I love these foods! I mean who doesn’t like banana’s? Its scary to think that our beloved healthy food is taking all the precious water. Perhaps this is why these foods are so good for us! Enjoy this article that I found interesting on CNN.
Reported by CNN:
It takes an average 2,000 liters of water, 10 full bathtubs, to grow just one kg of avocados.

(CNN)Almost 5 billion people could struggle with water shortages by 2050 due to climate change, according to the United Nations.

Already, more than 25% of the world’s crops are grown in regions with severe water shortages, according to the World Resources Institute.
In many countries, farmers tap into groundwater to irrigate their crops, particularly during periods of limited rainfall, and experts warn that irrigation is contributing to water shortages in drought-prone regions.
Here, we look at five everyday water-intensive foods that are using precious water in areas where it is in short supply.
Almonds from California 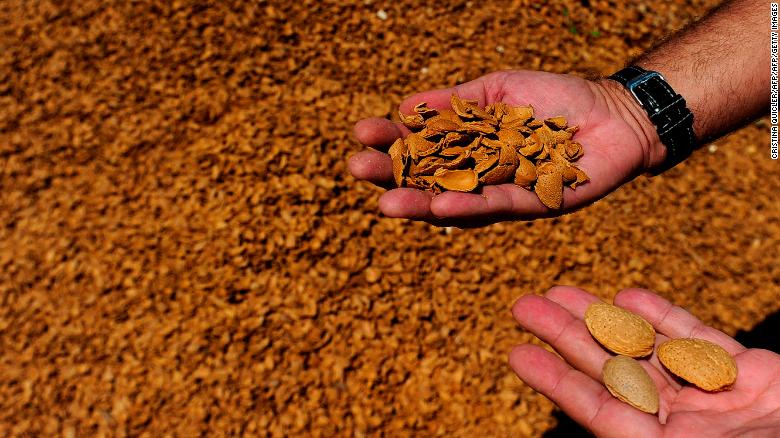 About 80% of the world’s almonds are grown in California. It takes 12 liters of water to grow just one California almond.
Read More
Aabout 80% of the world’s almonds are grown in California. A recent study found that between 2004 and 2015, it took an average of 12 liters of water to grow just one Californian almond, and almond farmers rely heavily on irrigation and groundwater reserves to water their crops.
Almond production uses around 2 trillion liters of water per year and is contributing heavily to groundwater depletion and land degradation, according to Professor Yoshihide Wada, deputy director of the water program at the International Institute for Applied Systems Analysis.
Groundwater levels in the Central Valley, where most almond crops are grown, dropped by almost a half-meter annually during California’s historic seven-year drought in 2011, according to a study by Cornell University.
“It is unsustainable,” Wada said, adding that almond prices could rise if farmers keep pumping deeper to reach groundwater. “It’s economically unprofitable if you go too deep.”
Many almond farmers are taking steps to cut water use, for example by using micro-irrigation systems, which apply water directly to tree roots.
The Almond Board of California says that by 2025, the California almond community commits to reduce the amount of water used to grow a pound of almonds by an additional 20%. 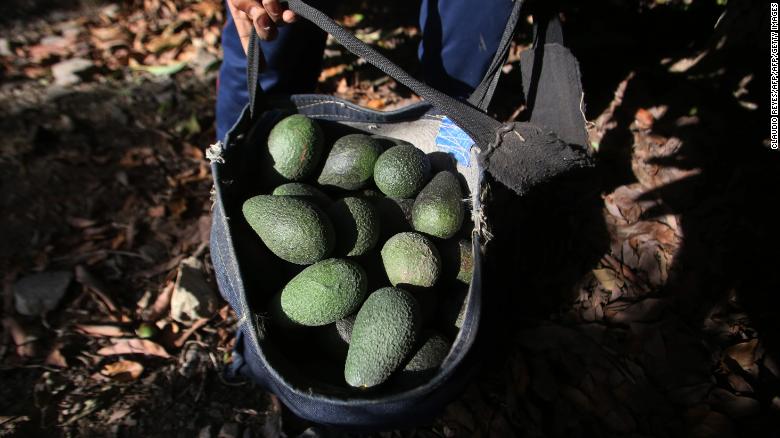 In Chile’s arid Petorca, every cultivated hectare of avocados requires 100,000 liters of irrigated water a day.
It takes an average 2,000 liters of water, 10 full bathtubs, to grow just one kg of avocados, according to the Water Footprint Network, a Dutch organization that advocates for better management of water resources.
The brunch favorite’s water consumption is four times the amount needed to produce the same amount of oranges or a kilogram of tomatoes, according to the network.
In the past decade, global avocado imports increased by more than 10% annually, according to Wada. Increased demand put a strain on drought-stricken farmers in the Chilean province of Petorca, who resorted to overpumping groundwater and diverting water from emptying rivers, he said.
In arid Petorca, every cultivated hectare of avocados requires 100,000 liters of irrigated water a day, according to WaterAid.
“Avocado trees are perennial crops, which require water year-round. Irrigation is the only way to sustain rapidly growing avocado production and exports,” Wada said.
Avocado farmers’ reliance on irrigation and climate change could compromise food security in the region, according to Wada.
“With climate change, future water supply is uncertain due to more extreme weather events. Water is being used for a short-term economic interest, but long-term management is needed to sustainably use the water resources,” he said. 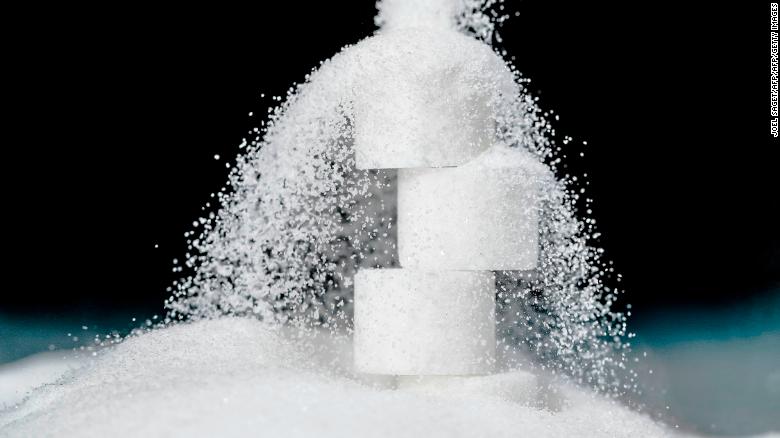 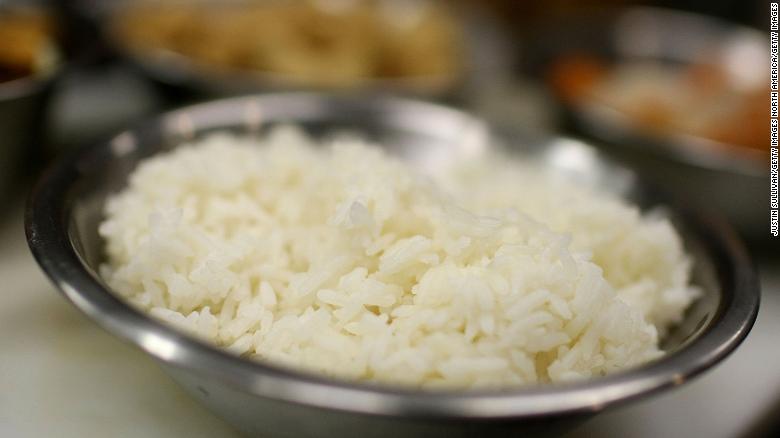 Rice uses 1,670 liters of water, eight full bathtubs, per kilogram.
India is the world’s leading rice exporter, but in some parts of the country, growing rice is using up groundwater faster than it can be replenished.
Rice uses 1,670 liters of water, eight full bathtubs, per kilograms, according to the Water Footprint Network.
What is climate change? Your questions answered
Last year, Columbia University-led research said many parts of India experience “chronic water stress due to heavy-water extraction for irrigated agriculture,” noting that in the states of Punjab and Haryana in particular, rice growing is demanding increasing amounts of irrigation.
According to nonprofit WaterAid, India’s rate of groundwater depletion increased by 23% between 2000 and 2010. India uses more groundwater than anywhere in the world — 24% of the global total — and 1 billion people there live in water-scarce areas.
The Indian government subsidizes diesel electric pumps, allowing farmers to continue pumping groundwater during periods of limited rainfall, Wada said, adding that the next two decades are a “critical” time for the country to reduce its water shortages.
The Columbia researchers suggested that in some parts of India, planting alternative cereals, including sorghum, maize and millet, could provide more nutrition than rice for the amount of water they consume.

Bananas from the Dominican Republic 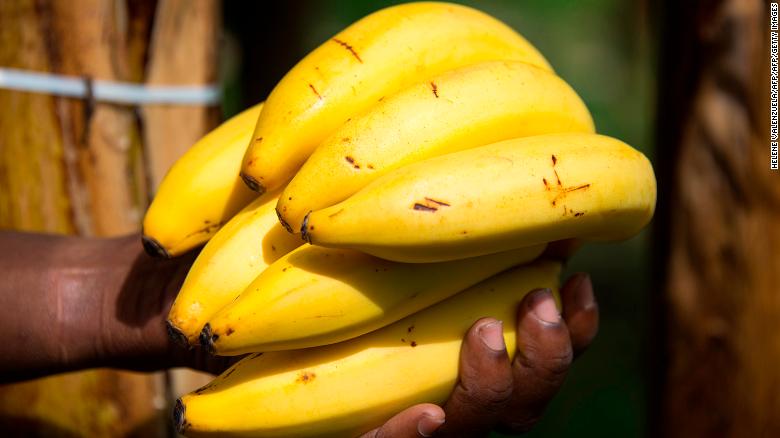 One large banana on average costs 160 liters of water.
One large banana on average costs 160 liters of water, according to the Water Footprint Network.
The Dominican Republic is the largest producer of organic bananas worldwide, accounting for over 55% of global production. But most farmers rely on inefficient irrigation methods for their production, according to Ervin, “and are increasingly vulnerable to intense downpours on the one hand, and water scarcity on the other.”
The Dominican Republic is in the grips of a severe drought, which has halved the country’s banana production, according to Wada.
By 2050, the country’s annual water deficit could exceed 500 billion liters, according to a 2013 report by the International Institute for Sustainable Development, although agriculture is not the only reason. The report suggested that improving irrigation efficiency and switching from bananas to less water-intensive crops, such as sorghum and mangoes, “has enormous potential for water conservation.”

Photos: 10 water-intensive foods and drinks
Avocados: It takes an average 2,000 liters of water to grow just one kg of avocados, four times the amount needed to produce the same amount of oranges or a kilogram of tomatoes, according to the WFN.

Photos: 10 water-intensive foods and drinks
Wheat: It takes about 1,827 liters of water to produce 1 kg of wheat. Globally, 70% of its water footprint comes from rainfall and 19% from irrigation.

Photos: 10 water-intensive foods and drinks
Rice sucks up 1,670 liters of water per kg. It relies heavily on rainfall (68%) as well as irrigation (20%) to grow.

Photos: 10 water-intensive foods and drinks
Beer has a global average water footprint of 1,420 liters per kg. One glass of beer (250 ml) costs 74 liters of water.

Photos: 10 water-intensive foods and drinks
Bananas: It takes an average of 160 liters to grow one large banana. Globally, 84% of bananas’ water footprint comes from rainfall and 12% from irrigation. 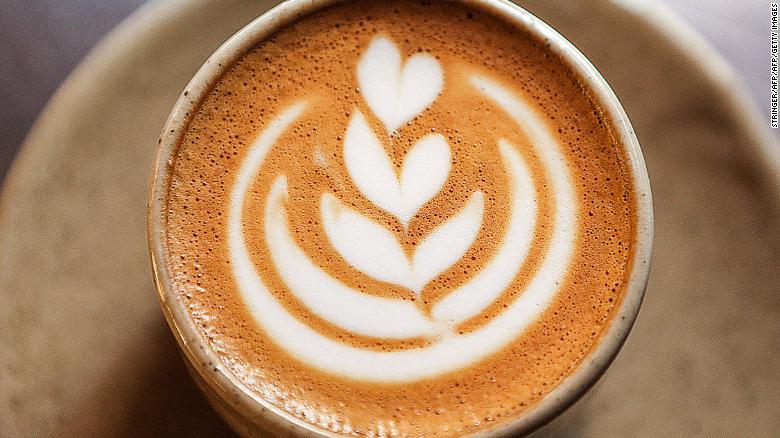 Photos: 10 water-intensive foods and drinks
It takes water to make everything we eat and drink. The Water Footprint Network (WFN) ranks products by how much water they take to produce on average — their “water footprint.” It’s broken down into “green” water (rainwater), “blue” water (surface and groundwater) and “gray” water (freshwater pollution created).

Here we show 10 water-intensive foods, and their water footprint. Coffee: It takes an average of 130 liters of water to make one cup of coffee. 96% of coffee’s water footprint comes from rainfall.